If you could only play one coverage all game long, what would it be?

Do you even have a coverage like that in your playbook? Do you have the rules and adjustments built in to the plan to handle everything you're gonna see from your opponent?

For Coach Tyler Manes, the answer is simple: 2 Read

In fact, because his kids are so good and so familiar with this coverage, he's able to do so many other things in the secondary, and at the end of the day, he feels comfortable knowing he can always come back to 2 read.

Why does he love it so much? Strap in, we're about to take a deep dive into how to run this coverage at the high school level.

Before we get started, this is just a small sample of everything that's covered in the Tite 3-4 Defense. With almost SIX hours of chalk talk, Coach Manes gives you EVERYTHING you need to build a system around one of the most flexible schemes in the game today.

CLICK HERE to save big on the whole clinic.

What is 2 Read Coverage?

Put simply, this is a very specific version of Cover Two.

This is the coverage that Coach Manes is going to hang his hat on. As much as possible, he wants to stay in this coverage. The reason is because it’s so flexible, and his kids practice it every single day, starting on the first day of spring ball all the way through the season.

You can play this coverage a lot of different ways, and they all have merit depending on the opponents you see and the players you have.

Dave Aranda calls it “Nail” and in his playbook he’s going to play it whenever there are two split receivers to one side. Other people refer to this as “Palms” coverage, and Nick Saban calls it “Clamp”.

Coach Manes just calls it “Rambo” and that’s what his players know it as.

I don’t care what you call it, but you’d better know how to teach it. Let’s go through the main coaching points for each player.

Alignment: 6-8 yards of depth with outside leverage on #1

This is different than the way Aranda and other coaches teach the coverage. Coach Manes teaches that corner to start with outside leverage because of all the bubble screens and similar routes that they see on a regular basis. The corner has to keep his outside arm free to funnel that bubble receiver back inside as he’s trying to shed the #1 receiver’s block, so outside leverage puts him in a much better position to do that.

The reason someone would use inside leverage for the corner is because they’re more worried about taking away vertical routes, and playing in this position puts him in a better position to be over the top of #1’s vertical. The best move for you depends on your own players and opponents.

The simplest way to run 2 Read is where they start in the teaching progression, and that’s for the corner to “Hammer” #2 on any immediate out-breaking route, like a bubble or an arrow/flat route. Anything by #2 that breaks outside before the first vertical step will be “hammered” by the corner.

When they coach up the Hammer technique, they are talking about the corner slow-pedaling and reading #2. If he breaks out immediately, the corner will attack with outside leverage on him to take away the quick throw. The near safety will also have his eyes on #2 so when he sees this he’s going to immediately get over the top of #1 and any vertical routes.

Once they’ve progressed past the first 3-4 days in their installation, they’ll add a “four steps vertical” read to the teaching progression. In other words, the corner will eye that #2 receiver and if he breaks out within the first four steps of a vertical release, he’ll “Hammer” that technique the same as before.

Originally Coach Manes had taught his guys to read anything five yards or less breaking out, but he didn’t like that because there are too many routes that break off at five yards, and are different in nature than the bubble/arrow stuff that the hammer technique is designed to take away. The four step rule allows the corner’s eyes to stay trained on the receiver instead of trying to count yardage in his head and break on the ball.

Alignment: 30 technique over the outside shoulder of the guard

The inside linebackers are playing hook-to-curl and looking to re-route crossers underneath.

The outside backers should drop and re-route #2 inside and drop to the Curl-Flat. They are coached to match up any underneath flat threat while staying underneath #1 to help the corner. If the offense throws the checkdown or underneath route, that’s fine, just rally and make the tackle.

Once again, this is different that the Aranda style of safety play, because in the college scheme the safeties are aligned two yards OUTSIDE the #2 receiver. Aranda is more concerned with taking away the deep out-breaking “7-cut” routes like a sail, corner, and deep square out from the slot at 10-12.

“LOCK” call for the safeties

What if #2 is not split out, but instead is in the backfield or tight to the formation like a tight end or H-back? In this case, the #2 is “in the core” of the formation, and different rules apply.

In that case the safety would make a “LOCK” call to his side. This tells the corner to that side that the safety doesn’t feel like he can get over the top of #1 if #2 goes out. This is used when there’s a ton of space between #1 and #2. 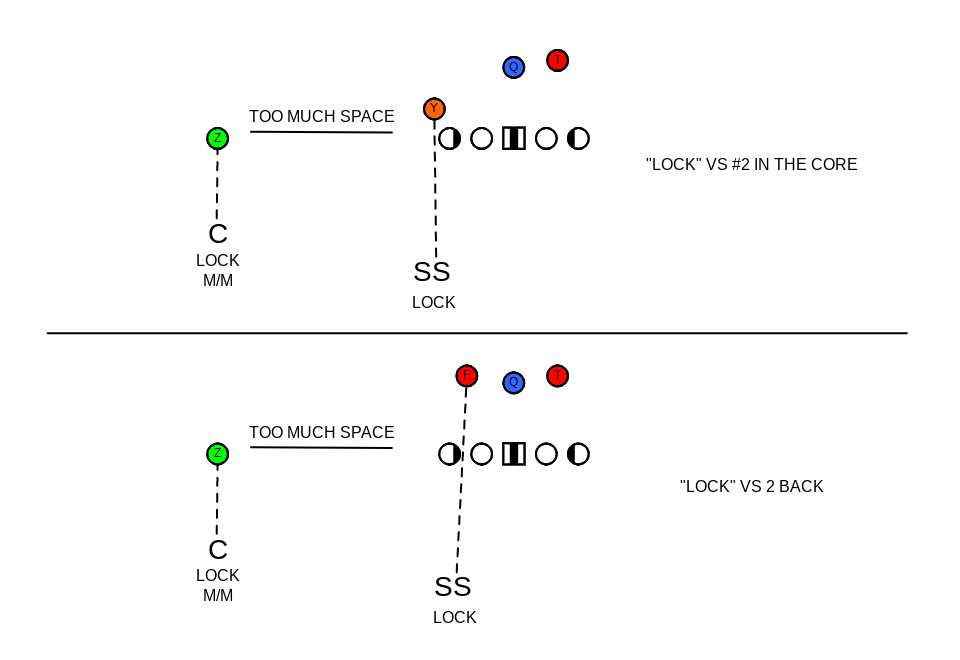 Dave Aranda actually studied this and according to the numbers he found (at least at the college level), 85% of the time when #2 is in the core of the formation, he’s not going vertical. In most cases he’s either staying in to block or he’s running some kind of underneath route. This has major implications for the coverages you can play to this look.

Assuming the #2 is NOT going vertical, the safety should be “foxing the post”, which is another Aranda term that means he should be looking to the opposite #2 and trying to play underneath the post route coming from that side, or any vertical route threatening by #2.

Coach Manes refers to it as “Vicing the post”, like you’re putting the route combination in a vice. The opposite safety should be playing over the top and capping the verticals, and the opposite corner has outside leverage on the near post to his side, so the defense has a 3-on-2 to the double post concept here.

Some coaches prefer to rob the dig by #1 first before the safety gets his eyes to the opposite side, but Coach Manes finds it easier to teach his kids the first way to do it.

In this case the SS is slow-pedaling or patting his feet, and keeping his eyes on #2 to his side. If the #2 does not go vertical, his eyes go to the opposite #2 as we’ve already discussed. If that vertical threat from the opposite #2 doesn’t develop, only then do they look to rob the dig coming from #1. 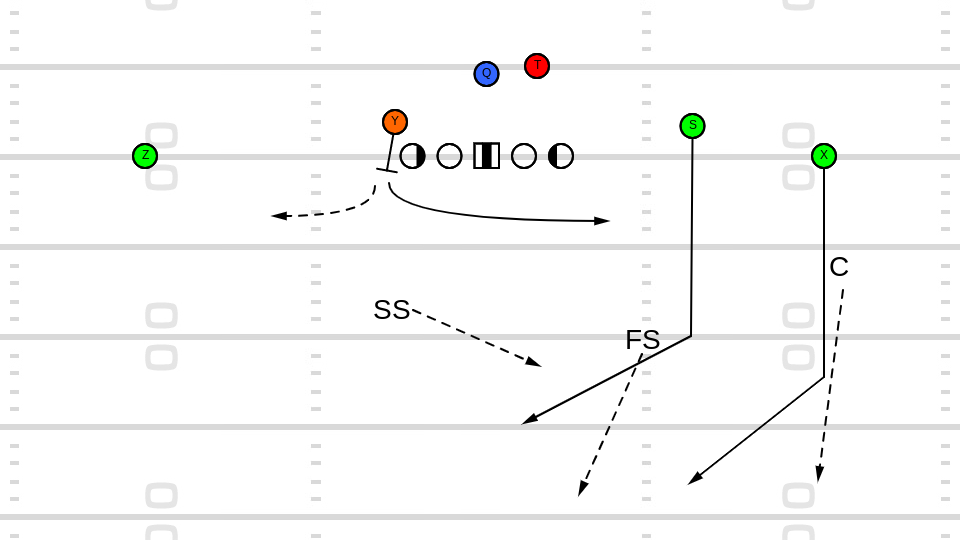 “The Aggressor” and the “The Protector”

On paper the safeties roles are almost interchangeable, however once the offense lines up and has defined the formation certain things change in the secondary.

Against an 11 personnel offense, with the Y in the core of the formation, they allow the SS to play a little more aggressively and downhill. This is who they refer to as “The Aggressor” in the scheme. He’s going to line up at 6-8 yards instead of 10-12 and give the corner a “LOCK” call to his side.

This narrows his focus for the run-pass read on the tight end, and allows him to get to the line quicker and fill his gap against the run. It also puts him in better position to “Fox the post/Vice the post” and play underneath the vertical threat coming from the opposite side, or progress to the dig coming from #1 to his side late.

He can do all of this, because the other safety is taught to be “The Protector”. This safety is backpedaling more because he’s got a much higher likelihood of a vertical threat to his side with #2 split out across from him. He lines up at the standard 10-12 yards because he has to “cap” the vertical and work in tandem with “The Aggressor”.

These basic reads and adjustments give you a lot of simple answers against the traditional spread teams that a lot of coaches see across the country.

But guess what, this coverage gets even better, and has even more wrinkles built in.