The idea of putting the formation into the boundary isn't new- offenses have been doing that for decades.

However, Ferris State's offense has used this particular wrinkle with great success to create an electric offense, especially in the run game. Today, we're going to take a closer look.

The Coaching staff at Ferris State loves putting the formation into the boundary, because usually it limits what the defense can do in response. Most defenses have a very limited menu, or a small number of calls when an offense puts the formation into the boundary. This is because it usually takes up such a small percentage of plays in a game that most defensive coaches don’t spend much time preparing lots of answers for it.

Offensive coaches, like the guys at Ferris State, love taking advantage of this, because once you figure out what the defense’s answer to these plays are, you can easily formulate a plan on how to attack it, knowing that they probably don’t have a lot of different ways to adjust.

On this first play we’ve got an example of both a condensed formation and a formation into the boundary from the Ferris State offense run game. Let's take a look at the way they use the formation into boundary wrinkle to add another layer to the triple option off of their inside zone blocking scheme. The offense is starting out in a condensed formation and then sending a man in motion to create a FIB bunch just before the snap. The motion to the boundary triggers the secondary to roll down into an 8-man box, giving the defense a 4-4 look, and the coverage call turns into a form of Cover 3, what Ferris State calls 3 Fox.

At first glance this doesn’t look good for the offense, especially when they’re trying to run a form of the zone read to the boundary, where the defense appears to have numbers. You have four defenders show up as immediate threats between the hash and the numbers, and several more who aren’t that far away either. The defense looks to have a big advantage at the point of attack, with an unblocked defensive end for the dive, and a scraping linebacker to take away the QB on the keep.

However, since the offense went formation into the boundary and moved to a bunch set, they have a 5-on-4 advantage, with every defender either being blocked or read.

As the quarterback carries out the mesh,  the unblocked end closes down the line and takes away the dive, so he keeps the ball.

The defenders start to converge on him in that space between the hash and the numbers, so he spots the "pitch" option and fires it out to him to the boundary. The offense has done a great job of pinning the defense in the alley, and since they are so out-leverage, the offense picks up a 15 yard gain. 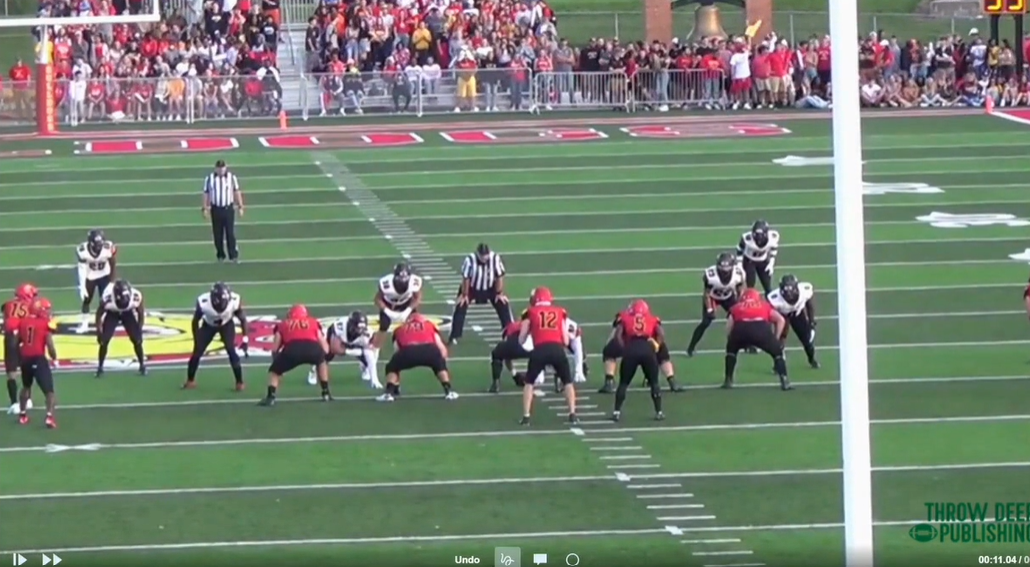 One of the keys to this play is the ability of the offensive line to create extra space for the read. As Coach Parker says, so much of the game is played on the hash, so the ability of the guard to clear the nose off the hash and make the unblocked end cover more space creates an easier read for the quarterback. This creates a different picture than the read for the GT counter play they run so much of. It forces the scraping linebacker to have to defend the quarterback in space, and only creates a bigger opportunity for the slot receiver on the third option to pick up yards.

The ability to manipulate the defense with formations and personnel is one of the most interesting things that this Ferris State run game has built into it. This is one of the things that adding a formation into boundary package has done for their scheme.

On this play the offense starts with their trips set already aligned into the short side of the field. The guy aligned at the H-Back position in reality is a slot receiver. The other slot receiver comes in motion to the field, and now the offense is running triple option football. When defending any offense, you have to ask yourself what their tendencies are. In the case of Ferris State, from what the opponent has shown on film, you would probably expect some kind of power read to the boundary, or a split zone scheme with the slot receiver blocking back across the formation.

All those things are still available even after the receiver has gone entirely in motion from one side to the other. They can even run a jet sweep read with the "sniffer" sitting behind the left tackle, a lot of different play action pass concepts, not to mention all of their normal 2x2 pass game concepts.

Now at the snap, instead of doing any of that, they're running zone read triple option.

That's the game-within-the-game that is played between two well-coached teams, and in the span of a few seconds, this offense has given the defense all those different threats to worry about. They've also forced them to change their alignment and account for a change in formation strength as that slot receiver goes in motion and flips the pass strength of the offense.

The quarterback reads first level (the defensive end) and pulls it, and then gets his eyes on the alley defender (in this case, the near safety who comes down). He should be threatening the safety more before he pitches it, but with all the space out wide, he wants to get the ball to him as quickly as possible and let him go pick up yardage. The offense comes away with a solid six yard gain here.